During the summer of 2017 I worked as the Location Manager on a feature film entitled “The Man Who Killed Hitler and then The Bigfoot.”  The film stars Sam Elliott and Aidan Turner.

We filmed entirely in Western Mass, mostly in and around Montague.  The writer/director Bob Kryzkowski is a Turners Falls native and had essentially been scouting it for years. He had a solid idea for most of the key locations but needed help locking them down and filling in some gaps.

We managed to fake 5 countries and two time periods with all but one location being within 30 minutes of Turners Falls.  It was definitely one of the most ambitious films I’ve worked on considering the budget and number of locations.  It wouldn’t have been possible without the assistance of local residents, businesses and governments.

I’ve put together a few photos I took while scouting for locations and a few behind the scenes shots as well.  I only took photos of a few of the locations since I was doing actual work most of the time.  I separated the images according to location with some grouped together.  They are loosely in the order we shot them in order to minimize spoilers. However you should see the movie before reading this.

We started production with one of the most ambitious locations, known in the script as the “Hot Zone.”  Originally the director had scouted the Turners Falls Airport but we ended up somewhere more interesting. While on their way back from lunch the director and cinematographer spotted the inflated dome of Indoor Action Sports in the distance. 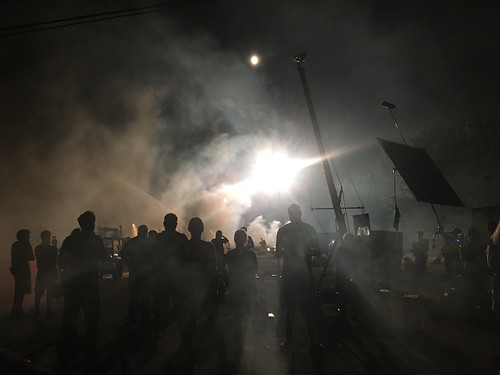 Cemeteries are usually a pain to secure.  The director had chosen this cemetery before I got hired.  It looked dicey when we found out it wasn’t a town cemetery but thankfully the private organization was cool.  We arranged for a grave to be dug away from actual graves and spent two long nights there. 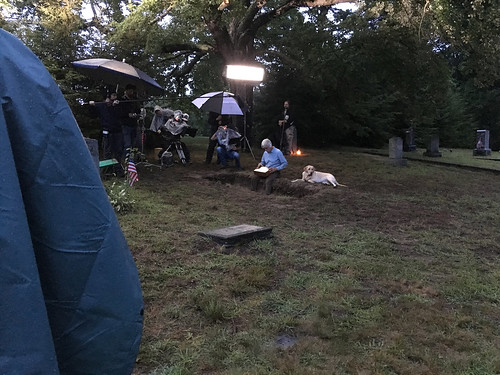 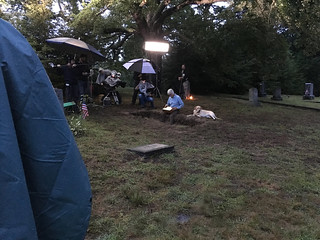 One of the longest sequences of the movie is when Sam Elliott’s character searches for the Bigfoot.  In the script he travels around the Canadian wilderness.  We combined several locations to get the variety of settings we needed.  Then our amazing special effects team worked their movie magic. 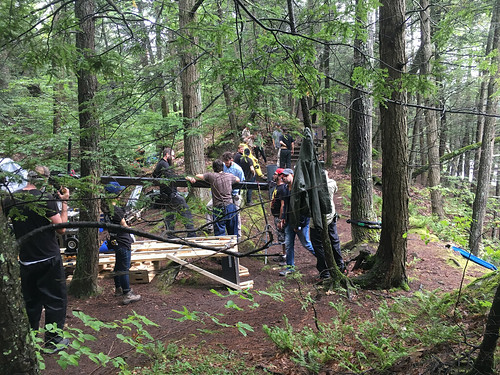 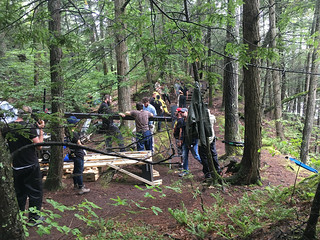 Most of the film was shot at a variety of locations around downtown Turners Falls, a village within the town of Montague.  I don’t have many photos of the filming because I was usually off set dealing with other things.  The citizens and businesses could not have been more cooperative.  This was the first major film production in town and things went very smoothly. 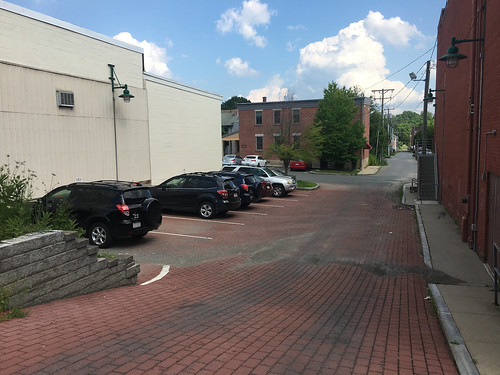 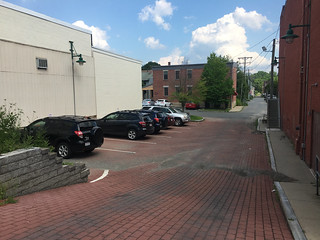 One of the locations in Turners Falls was the historic Shea Theater. The theater is owned by the town of Montague and managed by a non profit.  Not only did they provide us a great filming location but they also helped with holding and catering space while filming around town.  Many of the audience members and children on stage in the film were local residents. 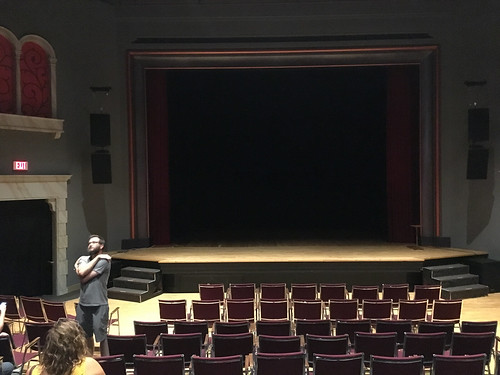 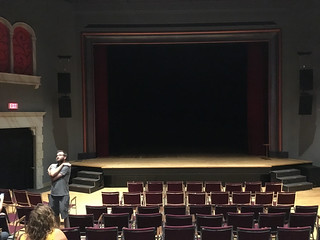 Some of the most complicated locations ended up with the least screen time. The montage of young Barr, played by Aidan Turner traversing Europe during the war consisted of 5 locations and required several days of filming.  The scenes required a dog, a boat, a truck full of chickens, a box car, lots of porta-potties and closing roads with the help of most of the Montague Police Department.  In the end the results made up only a few minutes of the movie. 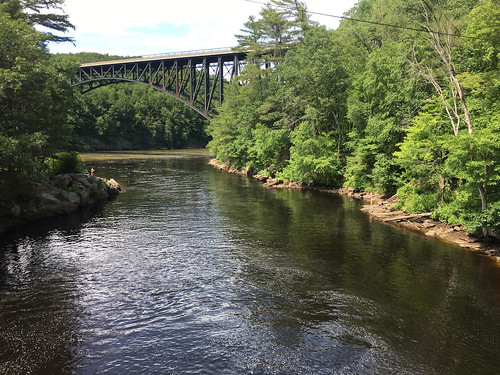 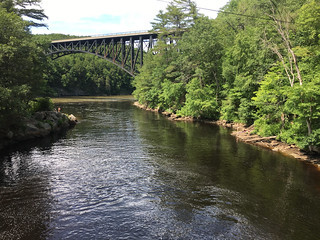 The location I was most responsible for finding was “Hitler’s Castle.”  There aren’t a lot of “castles” near Montague but there are some beautiful “cottages” in the Berkshires.  For our one location outside of Franklin County we moved out to Lenox to film at the amazing Ventfort Hall aka The Museum of the Gilded Age.  I had scouted it briefly years back and knew of it from the movie The Cider House Rules

.  It was a dream location.  The folks that run the museum could not have been friendlier or more accommodating.  We spent two days there and made the most of everything the house had to offer.  To learn more about the house check out their website or just go for a visit. 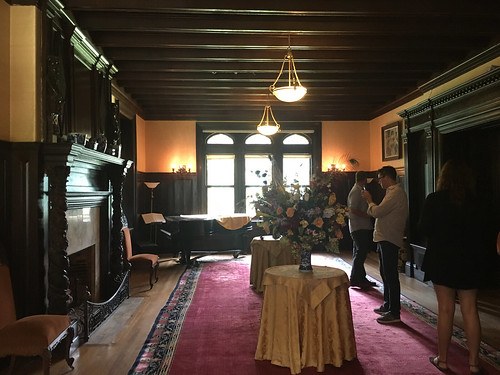 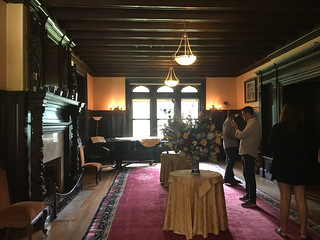 Our final “day” of shooting took place overnight at the Great Falls Discovery Center.  Normally the space is used as an art gallery and for events.  Because of our schedule there was no way to film in an actual restaurant so we made one instead.  It ended up working out great and they even let us hang out to celebrate after wrap.  Of course the Locations Department (both of us) cleaned up afterwards. 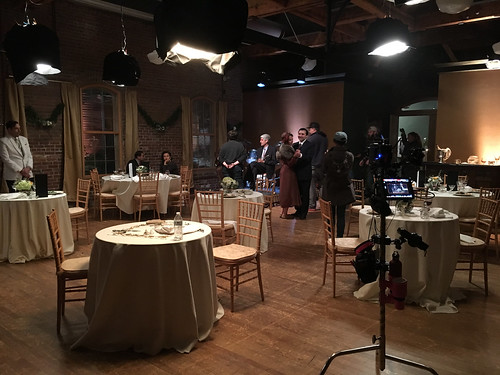 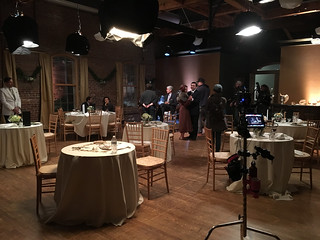